An Aesthetic History of Our Architecture 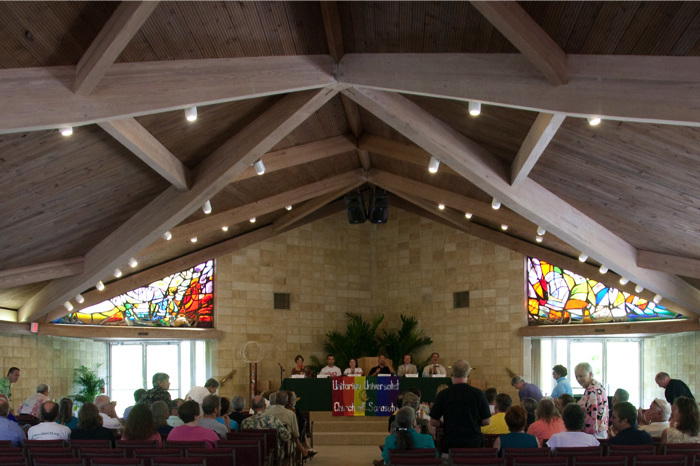 Art, Truth and Beauty in the Sarasota Unitarian Universalist Church

--History by the UUCS Arts Council

"Sarasota in the 1950s was graced with alluring natural beauty. What set it apart from so many other Florida beachfront communities was the concentration of artists, writers and architects who gathered here.

According to a 1952 edition of the Sarasota Herald Tribune, Sarasota had more artists per capita than any other city in the United States. Among them were American impressionist Helen Sawyer, portraitist Jerry Farnsworth and abstract artist Syd Solomon. A synergism existed, produced by the intermingling of these artists with award-winning authors like McKinley Kantor and Walter Farley – and a group of young architects just emerging from some of the finest architectural schools in the country, influenced by European masters of Modernism such as Walter Gropius, Mies van der Rohe, and Le Corbusier. This was the confluence of art and architecture that laid the groundwork for the Sarasota School of Architecture." 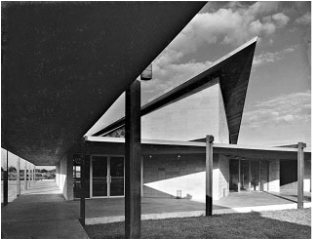 Notes: The original plan called for the present Sanctuary to become a fellowship hall with a larger circular fixed seating Sanctuary. When a Sanctuary building fund in the 1990s fell short of needed capital, plans were scaled down to provide needed office and meeting space in what is called the Lexow Wing. A metal shell canopy originally suspended over the pulpit was designed to hide necessary venting, lights and deflect sound. After the canopy fell, twice in the course of a few years, it was dismantled and disposed of. Now that sophisticated sound equipment makes acoustical refraction outmoded, other means of improving sound quality are being pursued.

The Unitarian Church Fellowship formed in 1952, first meeting in private homes and later in the West Coast Symphony Rehearsal Hall. Founding member, Steve Steinecke, bequested money to build a church structure and included an incentive. Terms of his will called for construction to begin within five years of his death (1957). A property search quickly began. The 3.5 acre Fruitville Road site was made available at a reduced rate. In 1961, the Church board contracted architect, Tollyn Twitchell, stepson of Reverend Karl Nielsen, the minister.

The ground breaking service occurred in January 1962. Minutes reveal that the Church treasury was in a constant flux as they raised the building capital needed. The minutes show eventual pledges of $50,000.

Twitchell designed the building on his own. His famous father Ralph Twitchell, a member of the Church Building Committee, signed off on the final plans after consulting several engineers over concerns for the unique design. Twitchell kept the original scheme simple for economy. He recorded, "That to keep it from being too plain and ordinary, details were very important." The original materials were all naturally exposed materials-Ocala limestone, concrete block, stacked 3 in. industrial cedar (with its attendant knots and beetle holes), rough tongue and groove cedar boards on the classroom walls, coral stone added to regular concrete for scored sidewalks and storefront glass enclosures and sliding glass walls and doors. His design was part of a regional architectural movement that had been taking place--adapted to our unique subtropical climate through innovative site planning and the use of indigenous materials, later given the name Sarasota School of Architecture. Honesty of materials was a term often used to describe those projects. Ralph Twitchell and Paul Rudolph are considered the founding fathers of that building trend and became known worldwide. The Church building was not included in historical movement lists, probably because of changes later made to the exterior.

A building committee chair persuaded a famous local artist, Syd Solomon, to design the stained glass windows, which were installed later when affordable. Solomon, an abstract artist, whose paintings appear in the Museum of American Art, Corcoran Gallery, Hirshhorn Museum and the Guggenheim Museum in New York, lived on Siesta Key and helped make Sarasota a nationally known artist's colony in the 1950s and 60s. A 2005 New York Times review of his work states, "His color combinations are also intriguing. Hot colors (yellows and reds) flirt freely with cooler ones (blues, greens and grays), creating dazzling - if often perplexing - atmospheric sublimities."

The method relies on marine silicone to bond the stained glass to a background sheet of clear glass. Black silicone was used to create the look of lead cames where the pieces of glass meet. This was economically sound and less susceptible to the weather.

Large circular mandalas mounted in the Sanctuary were created by Church member Dick Oxley, painter and instructor at Ringling School of Art. Mandalas are Asian concentric shapes representing the cosmos and contain images or characteristics of deities. Used as meditative tools in Jungian psychology they represent an effort to unify the self.

Walt Billings, Sarasota sculptor and church member was commissioned to design and create the copper chalice on the pulpit. He also created the chalice mounted in the courtyard. After retiring from business, Walt set up a forge, began sculpting and was represented by several Sarasota galleries.

Glass walls on the east and west side of the Sanctuary are designed to bring the outside inside and are typical of the Sarasota School of Architecture within the modern movement. For many years the surrounding land remained natural scrub. In 1982, the Board of Trustees granted permission for two trees to be planted in memory of church members. Thus began the Memorial Garden on the west side of the Sanctuary. The sandy area surrounding the Church remained un-landscaped until later, being planted over time by Church volunteers.

That brings us to the present.

Art, Truth and Beauty in the Sarasota Unitarian Universalist Church of Sarasota

Some 40 years ago, member Charlie Allman built a large music room on his little ranch house to accommodate a large and growing pipe organ. (It contained over 2000 pipes before he had to dismantle it to move to Florida).

When they moved to Florida, they were sad to leave the big organ behind, but the little one was small enough to move and they hoped that it could remain part of their lives to enrich the musical program of their newly adopted church.

The Allmans offered the organ to the Unitarian Universalist church of Sarasota and even made arrangements for transporting it and setting it up. The congregation was delighted to hear our own Jan Dorsett play the organ on several occasions and it was decided that we would retain the organ in our Sanctuary.

We are very grateful to the Allmans for this generous donation and the added range it offers to our musical program.