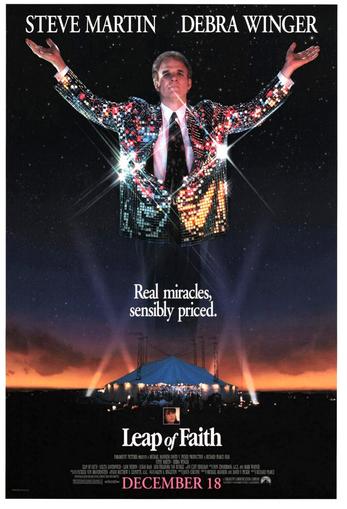 We will be showing the last in our series of 5-star movies on Friday, Sept. 9 at 7 p.m. in the sanctuary. "Leap of Faith" is about a sham evangelist (Steve Martin) who gets stuck in a small town and decides to hold a revival there.   It changes his life.

Steve Martin’s performance is remarkable and you will leave with a smile and plenty to think about. Come join us!

According to Youtube, in a tour-de-force performance, Steve Martin plays Reverend Jonas Nightengale, a slick-as-oil flimflam man who'll trade salvation for a donation to his touring ministry. Jonas knows how to work a crowd and a con, but his works of wonder are done with mirrors and smoke. When his tour bus breaks down, Jonas pitches his tent in impoverished Rustwater, Kansas. While his alluring manager (Debra Winger) tries to persuade the local sheriff (Liam Neeson) not to close the show, Jonas sets his sights on a beautiful skeptic named Marva (Lolita Davidovich). But making a believer out of Marva is going to take a real miracle.