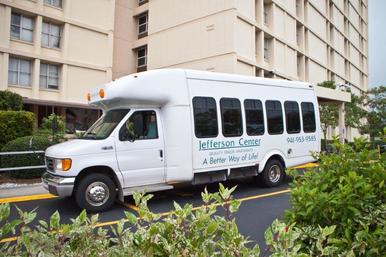 In late August, the Jefferson Center had its second and third floods of the year (The first was July 4). Heavy rains, coupled with construction, led to flooding of the parking lot. Many cars were damaged by flood waters - several were totaled. Four residents fell, wading through knee-high water to get to their cars. It was a frightening experience for all.

In 1965, Unitarian Universalists in Sarasota secured funding from the Federal government to build the Jefferson Center. In 1968, the building was completed and the first residents moved in. UUs from various congregations along the Suncoast continued to serve on its Board.  Recently the Board transferred the JC to Westminster Communities.  Three Sarasota UUs are on that Board.

Everyone at the Jefferson Center appreciates the support we've received from the church's Share-the-Plate collections. Thanks to your generous donations, along with other funding sources, we have a lovely new handicap-accessible bus for outings. It did not flood!

Click here to see ABC7 video report on the flooding.