The Making of Virtual Church 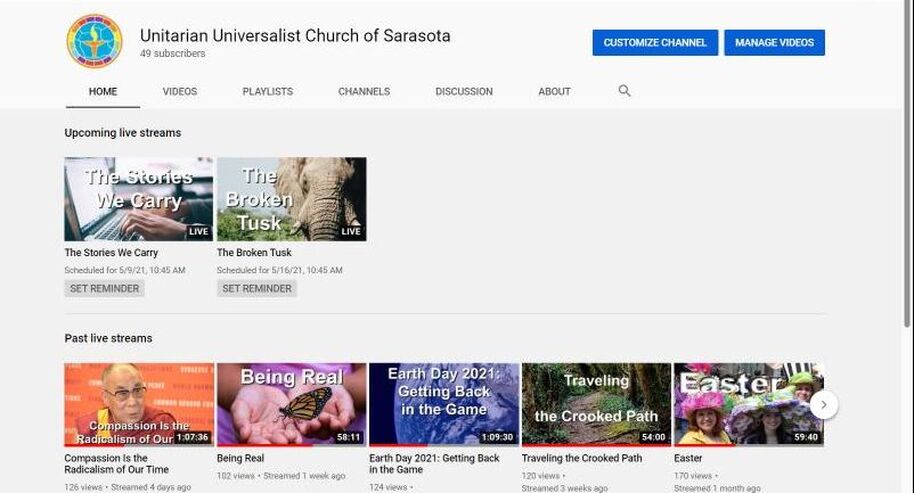 Our Youtube channel in early May, 2021
​Live Streaming, January 10 until now:
We began live streaming our services on January 10, 2021. Before that, we posted prerecorded services on our website, described below.
​​
People have asked, "How'd you do that?" Here's a detailed description:

Each service begins as a minister's idea.

From there, it then appears as a title and description which the minister posts for the worship team. This planning document is available to the staff, including the ministers, Director of Religious Education (for young people), musicians, administrators and the Multimedia Committee. From there, it is published and illustrated on this website's Upcoming Services page and later in the weekly Contact.

Next comes the Order of Service, listing the various elements of the service, such as the readings and hymns. This is also posted for the worship team to see in order to prepare the music and multimedia elements.

Finally, the sermon script is finalized and shared with the technicians so that multimedia elements can be coordinated with the message. (Read more about Google Documents in the Internet section below.)
​
Musical elements are recorded Thursday evenings in the sanctuary, to be edited by Sunday morning.

Sunday morning by 9:30 am Doug Caldwell and Klaus Obermeit meet in the Control Booth to prepare and test the technical parts of the service. Microphones are placed, camera settings are tested and preset, sound levels and lighting are tested. Since the ministers are not present yet, stunt doubles are employed to show the height of the various ministers. Thus, cameras can be preset at the proper zoom level to avoid "cutting off" a minister's head. (see picture of Stunt Dougs 1 and 2 below.)

If the music is not live, we still uncover the piano, lift the lid and position a microphone at the piano. Though not used, this "stunt Mike" simulates the appearance of a piano ready for live action. It just wouldn't look right to have the minister speaking behind a covered, unmiked piano.

By 10:00 all the ministers and other participants in the live service have arrived. We verbally "walk through" the service, making sure placement of participants and equipment is correct. Transitions from one element to another are also reviewed. Microphone levels are checked.
At 10:35 the opening image is displayed along with the countdown clock, the background music cd is played, and the video/audio feed is streamed to YouTube. This begins our "Ten Seconds of Terror" as we monitor our YouTube channel (shown below), waiting for the grey "GO LIVE" button in the top right corner to turn blue. After clicking on that blue GO LIVE button, we again wait and watch for our live stream to show in the upper left window. Once that shows, we are live, and Doug checks his iPhone to make sure it is receiving the video and sound properly. We allow ourselves these ten minutes from 10:35 to 10:45 to fix any last-minute issue that might arise in our connection to YouTube. So far, the connections have been reliable.

Youtube studio. Note "GO LIVE" button top right.
And here's the GO LIVE button, now blue, ready to receive our signal. After about ten long seconds of waiting and hoping, it's a relief to see this. Although I should add that we then check our website on Doug Caldwell's smart phone to be sure we can see and hear the live stream, giving us the final assurance that everything is working properly.

Once we see and hear the live stream on Youtube, we direct our attention to the countdown clock. At 0:15 we fade to a wide shot of the sanctuary. At 0:05 we zoom in on the minister at the pulpit. At 0:00 - 10:45 am - we remove the countdown overlay and the minister begins the "cold open" of the service. After a few words of welcome we play the recorded Prelude with announcements and relax for a few minutes.

Our video mixing program, vMix, displays the current program output next to a preview video. While the current program output video is being sent, we prepare the next video or camera shot. The picture below shows our vMix screen as we go live. In the top right, the Powerpoint title slide is shown, with the countdown overlay on top of it. The Program output has a green bar on top, the Preview image to the left of it has an orange bar above it. The same color scheme is visible at the bottom showing the three camera inputs, the Powerpoint input and the countdown overlay. The green 4 button indicates that we are using Overlay 4 format, which is full screen. That's why the countdown stretches all the way across the screen. At the very bottom, the red Record and Stream buttons indicate that we are recording this video at the same time we are streaming it to Youtube.

At the appropriate time, we click on the Fade button to fade from the current program output to the next video. In this case, that would be to fade from the Powerpoint to the closeup shot of the pulpit. Thus, the camera operator is constantly preparing the next video, be it a live camera shot or a recorded video. Also, various overlays are also triggered at the appropriate times. These include full-screen images, such as the visitor's link on the homepage, or partial-screen overlays, like the Donate button or the lyrics. vMix displays these additional elements below the two large video images mentioned above - the current program output and the preview video. 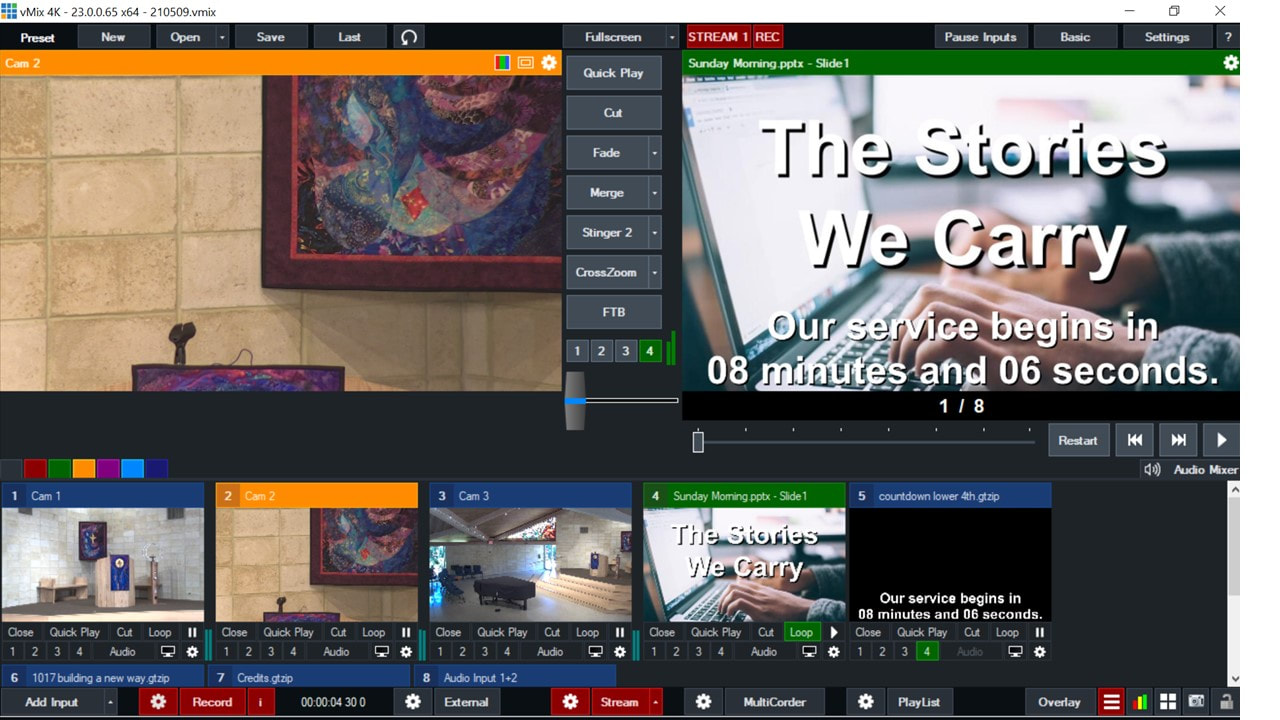 A demo of this program is shown below. The dual-screen layout is demonstrated at 1:34 on that video. As you watch the video you will notice that it quickly gets very technical. Most of these technical settings are already installed in our version of the programs, so an operator does not need to change them or even get into them. As time allows, we will produce our own tutorial which will be much simpler.
At the end of the service, we zoom in on the stained glass reflected in the piano's music stand. At the same time, we trigger the credits overlay which crawls up from the bottom of the screen. When that is finished, we fade to a still picture of the stained glass with thank you text and an invitation to our coffee hour.

When the live stream ends, Youtube displays a series of other videos which might be of interest, based on the user's Youtube viewing history. In order to avoid having the mood of the service interrupted with distracting videos, such as cat videos, we continue the stream with the final image for another 30 seconds or so. Thus, we're visually suggesting to the viewer that the service is over and it's time to join us for coffee hour, rather than letting Youtube suck you into distractive "entertainment" videos and commercials. 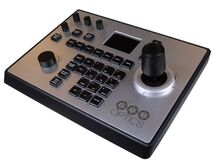 Joystick camera controller
The following illustrations and video demonstrate how these cameras work and how important they are to the whole operation. The video also demonstrates a joystick and push button controller similar to the one we use to control the cameras. This controller allows us to Pan, Tilt and Zoom the cameras (Hence the PTZ name.)

For example, for the silent meditation we want a closeup of the chalice. In the table of presets shown below, note preset #6 for Cam 3 is labelled "Chalice CloseUp." So to prepare for the silent meditation, we put Camera 3 in the vMix preview window and push the Cam 3 button and then the #6 button, which moves the camera to the proper pan, tilt and zoom setting for a closeup of the chalice. At the beginning of the silence, we use vMix to fade to Camera 3.

Another example is the announcement time. For that, we use Cam 2, preset 4, "Pulpit with chalice." This pans Camera 2 to the right and zooms out, displaying the minister to the left side of the screen. This allows room to display a picture, such as the Donate button, on the right side of the screen, on top of the chalice. This setting is also useful if we have a reading and want to display a picture with the reading. To see these examples in action, just go to our youtube channel and watch one of the videos.

The controller allows 255 presets for each camera. The blank presets in the table below are used for special settings, such as guest musicians.
​
Two of our cameras are permanently mounted to the walls. The other one is movable on a tripod. It was recently moved to the Memorial Garden for a memorial service honoring one of the members whose ashes are buried there. 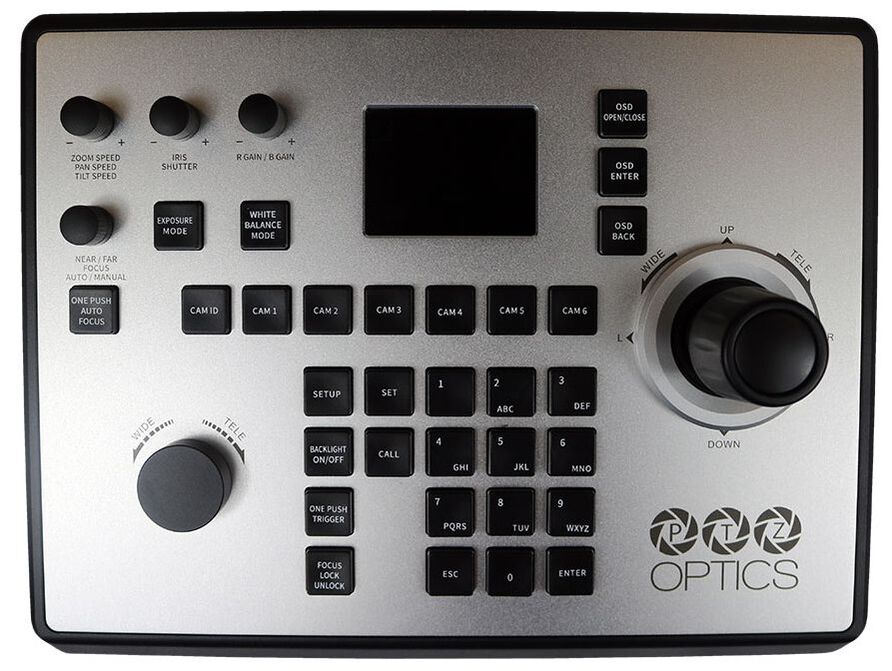 Other software we use deserves to be mentioned:

The Internet seems an obvious choice. It is the platform upon which the service is broadcast.  Beyond that, it is an important tool in preparing the broadcast. It allows us to work together even though we are physically distant. While some communication is done via email, a lot of back-and-forth is avoided using Google Documents. These keep everyone involved "on the same page." All cohorts have editing rights, so notes, comments, questions and corrections can be entered right on one specific document, rather than having to send out multiple versions of the same document. Since the documents are cloud-based, information can be entered at one location and downloaded at another. For example, when Klaus needs to prepare overlays for lyrics, he can post the text at home on Monday on that week's google document. When he is in the Control Booth Thursday evening, he can copy that text from the google document and paste it right into the vMix overlay on the Control Booth's computer. Thus, Google documents are an invaluable tool in planning and producing the service videos.

Doug Caldwell prepares the prelude video and posts it on his Vimeo account. When Klaus is in the Control booth Thursday evening or Sunday morning, he downloads Doug's video from Vimeo into vMix.  Again, the cloud is an important storage place for the production team.
Prerecorded services, March 22, 2020, thru January 3, 2021:
The Sunday after services were shut down due to Covid, services were prerecorded and then posted to our website. Here's how that was done:

1. Prelude, Chalice Lighting, Chalice Extinguishing: These parts were recorded in March once church was closed. They were reused as appropriate. Occasionally additional recordings were added to the repertoire.

2. Hymns were recorded at the church, often on Wednesday evenings. See pictures below.

3. Remarks by the ministers were recorded at their homes using their personal equipment. Beth  recorded using her iPad. Budd recorded using Zoom on his computer. The recordings were sent to Douglas Caldwell to be compiled into the finished service video.

4. Recordings by others were youtube or other videos used with permission. Doug or Klaus Obermeit download them for use.

5. Editing and uploading: All the elements were recorded by Doug or sent to him for inclusion in the final video. He pasted the recordings together, added the text overlays for the announcements, hymns and readings, inserted the still pictures, and checked the sound levels. This process was usually finished sometime on Saturday. Doug then posted the final recording to his Vimeo site for Klaus to download. Klaus then uploaded it to our website and tested it, Late Saturday evening Klaus moveed it to the home page so it was ready to view Sunday morning. It stayed on the home page till Tuesday, when it was moved to the Virtual Church page. Klaus also helped with the recordings, organizing the various elements and seeking permissions to publish.

These recordings are available on Virtual Church 2020. 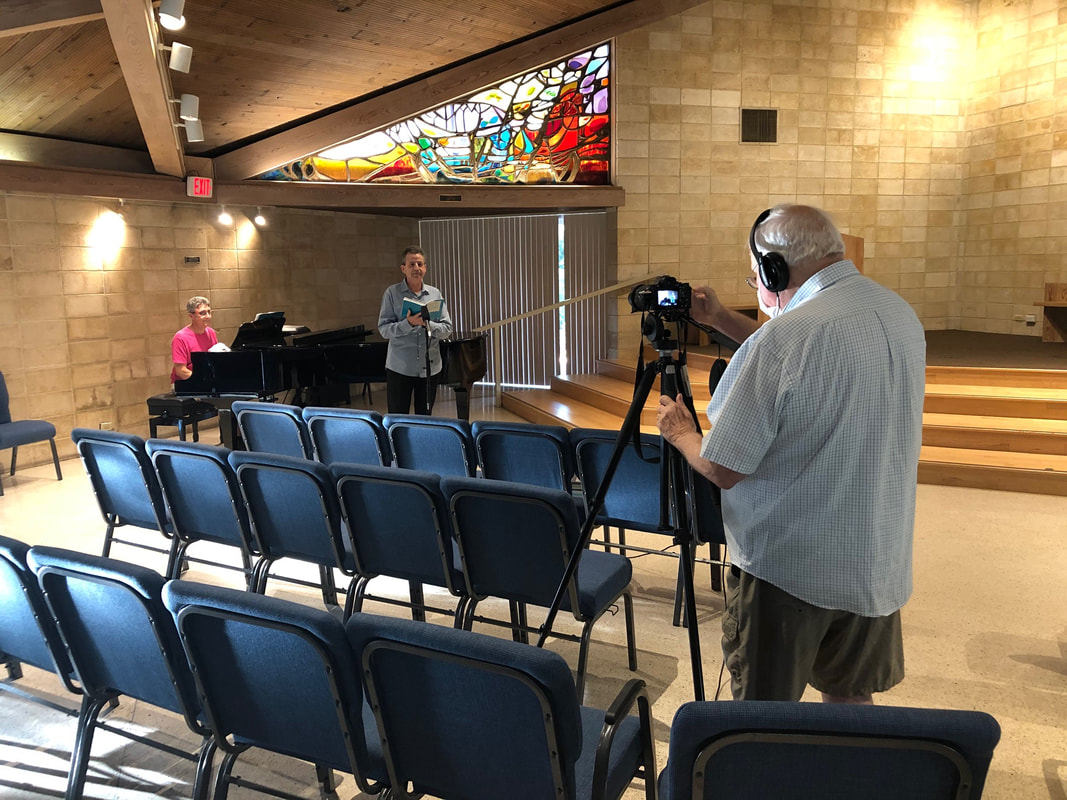 Doug recording Robert Lischetti singing, with Don Bryn accompanying, during a recent recording session. With Klaus there are only four people in the sanctuary, all of them keeping a safe distance from each other. 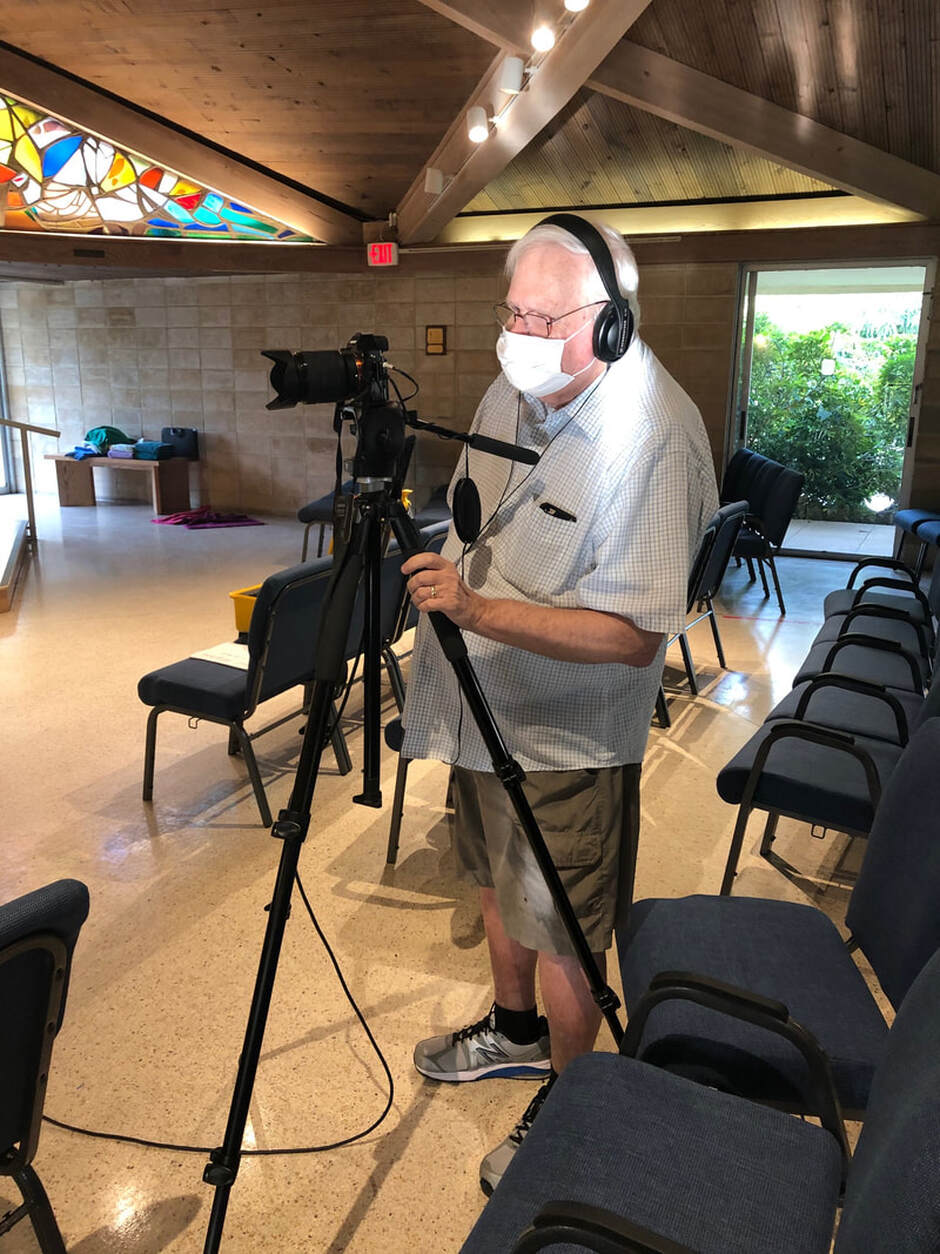 Doug at the camera, recording a hymn in the empty sanctuary. 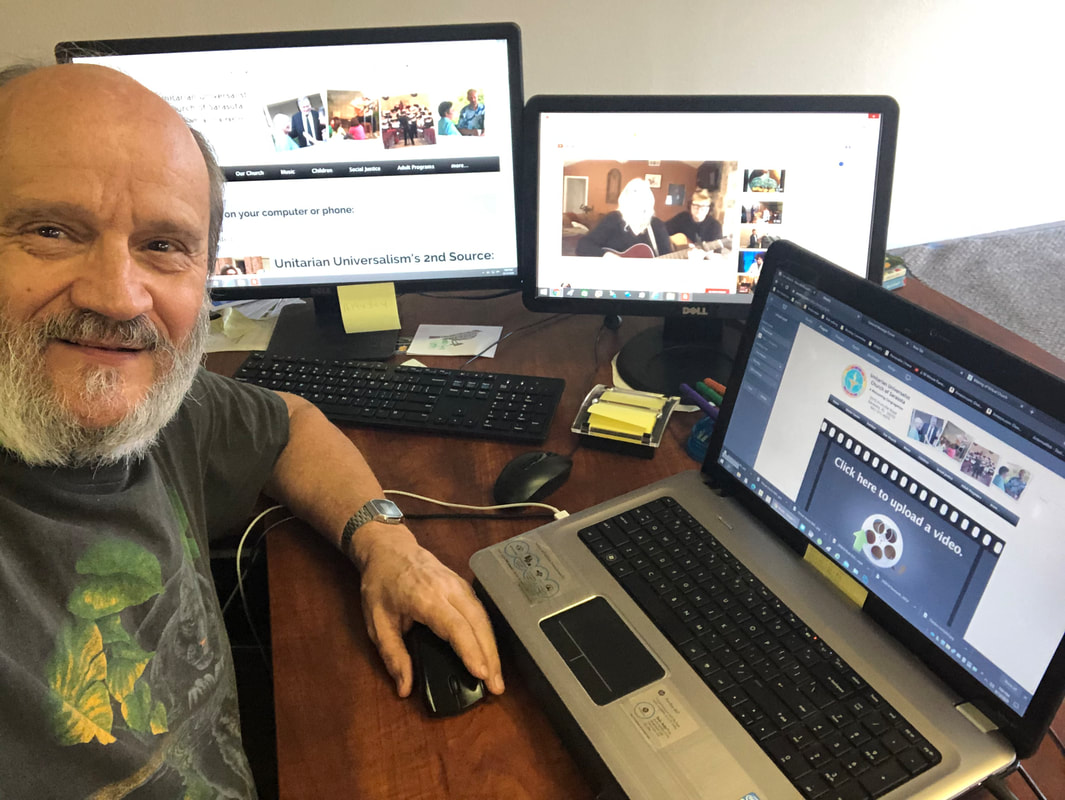 Klaus at his computer, ready to upload Doug's recording to the website.