Crystal M. Fleming, PhD, is a writer and sociologist who researches racism in the United States and abroad. She earned degrees from Wellesley College and Harvard University and is associate professor of sociology and Africana studies at Stony Brook University. Fleming writes about race, sexuality, and politics for publications including The Root, Black Agenda Report, Vox, and Everyday Feminism, and she has tens of thousands of followers on social media. She is the author of Resurrecting Slavery: Racial Legacies and White Supremacy in France.

“Dr. Fleming offers a straight-no-chaser critique of our collective complicit ignorance regarding the state of race in the United States . . . . This book will leave you thinking, offended, and transformed.”
—Nina Turner, former Ohio state senator 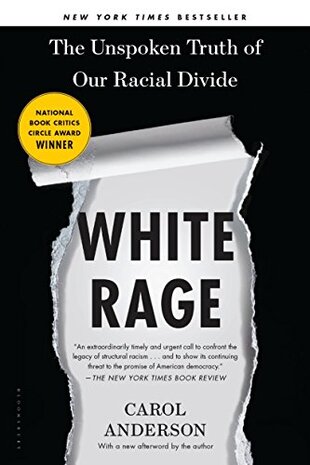 The Racial Justice Reading Program has completed its first book discussion series.  The first book of the program was “White Rage” by Carol Anderson and discussions took place on five occasions during the month of October.  A total of forty-eight (48) UU members/ friends participated in the program with group sizes ranging from 8 – 20 people.  Participants described the book as “heart-wrenching” in its frank survey of the history of our nation’s racial animus towards African-Americans.  The most common comment from readers was their “shock” at the political, legal, and judicial barriers enacted over time to prevent full citizenship and opportunity for the former slaves and their descendants.   Many commented, “how come I was never aware of this history” or “I felt shame” for our nation’s behavior revealed in this book.
​
On asking for feedback about the program, the consensus was a.) the program was valuable and should be continued,  b.) the Social Justice Committee should explore ways to use other media (movies, workshops, etc.) to advance our understanding, and c.) the book reading timeline should be compressed to end before part-timers go north.