There are so many resources about Race, Racism, Systemic Racism, How to be a White Ally, How to be an Anti-racist Activist and so many other topics related to Racial Justice.  We have attempted to share with you information and links to other resources that you might want to check out.  As of yet, Your Racial Justice Coordination Team has not vetted all of these resources that have come to us via viable sources, but, we wanted to share.  This page will be updated frequently.  If you have any comments on this or the other Racial Justice pages, please contact one of the Racial Justice Coordination Team Members.
Click on the ICONS below to jump to those resource sections

Caste, the origins of our Discontents by Isabel Wilkerson-  ​In this brilliant book, Isabel Wilkerson gives us a masterful portrait of an unseen phenomenon in America as she explores, through an immersive, deeply researched narrative and stories about real people, how America today and throughout its history has been shaped by a hidden caste system, a rigid hierarchy of human rankings.

Centering- ​In October 2015, a group of distinguished UU religious professionals of color gathered together in Chicago to embark on a radical project. The conference was sponsored by the UUMA's Committee on Antiracism, Anti-oppression, and Multiculturalism. It started with the premise that discussions of race in Unitarian Universalism have too often presupposed a White audience and prioritized the needs, education, and emotions of the White majority. The goal was to reframe Unitarian Universalist anti-oppression work by putting the voices, experiences and learnings of people of color at the center of the conversation. The resulting book, Centering, captures the papers that were presented and the rich dialogue from the conference to share personal stories and address the challenges that religious leaders of color face in exercising power, agency, and authority in a culturally White denomination. Centering explores how racial identity is made both visible and invisible in Unitarian Universalist ministries.

How to be an Anti-Racist by Ibram X Kendi.-  Mr. Kendi's concept of anti-racism reenergizes and reshapes the conversation about racial justice in America--but even more fundamentally, points us toward liberating new ways of thinking about ourselves and each other. Instead of working with the policies and system we have in place, Kendi asks us to think about what an antiracist society might look like, and how we can play an active role in building it.

How to be Less Stupid About Race by Crystal Fleming, PhD-  " Dr. Fleming offers a straight-no-chaser critique of our collective complicit ignorance regarding the state of race in the United States....This book will leave you thinking, offended, and transformed."- Nina Turner, former Ohio state senator.

Me and White Supremacy by Layla F Saad- ​Structured as a 28-day guide targeted at white readers, the book aims to aid readers in identifying the impact of white privilege and white supremacy over their lives.

In The Color of Law (published by Liveright in May 2017), Richard Rothstein argues with exacting precision and fascinating insight how segregation in America—the incessant kind that continues to dog our major cities and has contributed to so much recent social strife—is the byproduct of explicit government policies at the local, state, and federal levels.

​The Color of Law was designated one of ten finalists on the National Book Awards’ long list for the best nonfiction book of 2017.

Uncomfortable Conversations with a Black Man by Emmanuel Acho
​Dear white friends, country persons: Welcome. Pull up a chair. Consider this book an invitation to the table." That table was built in a series of frank and open interviews intended to spark real conversation, real questions and provide real answers in a "safe space" for folks to begin the work of unpacking what it means to be white and Black in America. And, thank goodness he continues that talk here. Patient and understanding, also direct and uncompromising, Acho aims squarely at education, empathy and compassion, asking us to look, reflect and make change happen.
​

An urgent primer on race and racism, from the host of the viral hit video series; “Uncomfortable Conversations with a Black Man”

Waking Up White by Debby Irving-Irving writes about her discoveries about herself after taking a graduate school course in "Race and Cultural Identity"  and how she began to question her long held assumptions about race and culture in her book, "Waking up White, and Finding Myself in the Story of Race."  "I see what I am spared day in and day out and I am focused on how easy it is for me to just wake up and go about in a world that was constructed for me."

White Fragility by Robin DiAngelo- Robin DiAngelo Ph.D., a New York Times bestselling author and racial justice educator, fleshes out what it means to be white and why the majority of people in the United States take grave offense at the mere discussion of racism in her book “White Fragility: Why It's So Hard for White People ​

White Rage by Carol Anderson-  From the Civil War to our combustible present, acclaimed historian Carol Anderson reframes our continuing conversation about race, chronicling the powerful forces opposed to black progress in America. 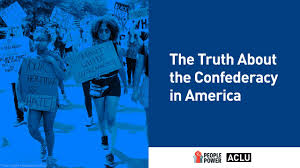 The Truth About the Confederacy in the United States
(1 hour 40 minutes)
​
President Trump claims that removing Confederate symbols amounts to erasing history. False. This is about whether we as a nation choose to honor those who made their names fighting for white supremacy and slavery.  Jeffery Robinson will speak about the dark history of the Confederacy and the monuments built in public spaces around the country – what these symbols really mean and how they’ve been used by politicians to rewrite history and incite racial violence.

Uncomfortable Conversations with a Black Man
​by Emmanuel Acho
(This is an on-going series of video conversations)
​
Uncomfortable Conversations with a Black Man, is a safe place to have the uncomfortable conversations about race that many people have never been able to have. But enough is enough - I want to remove the barriers for why we’ve never had these conversations. I want to provide a free space for curious white people to answer the questions they’ve always had but have been too nervous to ask. Like, “How can I have white privilege if I’m not wealthy?” or “is racial profiling ok if black people tend to commit more crimes” and my personal favorite from a 19-year-old girl from rural Alabama named Amy who asked, “if black people can say the ‘N’ word, why can’t I?” And many, many more.
​