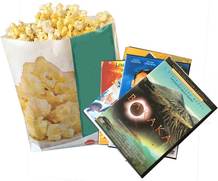 ​​Eating
It’s the biggest cause of disease, disabilities and death in the U.S. today. Featured on PBS, Air America and Pacifica Radio, this film is a compelling and often shocking look at the standard American diet.

Food, Inc.
Food, Inc. lifts the veil on our nation’s food industry, exposing how our nation’s food supply is now controlled by a handful of corporations that too often put profit ahead of consumer health, the livelihood of the American farmer,  the safety of workers and our own environment.

Genetic Roulette: The Gamble of Our Lives
This film is an unsettling tour through a myriad of serious health conditions implicated with genetically altered crops, from allergies to diabetes and autism. Never-before-seen evidence points to genetically engineered foods as a major contributor to rising disease rates in the US population, especially among children.

PolyCultures: Food Where We Live
This video portrays the diverse communities around Northeast Ohio coming together to grow a more sustainable and local food system that’s good for the health of individuals, communities, local economies, and the environment. It features national and international experts who place area food production into the bigger picture of sustainability.

Queen of the Sun: What Are the Bees Telling us?
This award winning documentary is a profound look at the global bee crisis. Taking you on a journey through the catastrophic disappearance of bees and the mysterious world of the beehive. It weaves an unusual and dramatic story of the heartfelt struggles of beekeepers, scientists and philosophers from around the world including Michael Pollan.

Troubled Waters
A breakthrough, deeply moving film that sounds the alarm on our most precious resource. Featured on ABC TV, Troubled Waters explores the critical issues of water shortage through the lens of faith and from the perspective of people in Bolivia, Malawi, the Middle East and the United States who struggle daily to find access to clean, safe water.

Vegucated
Vegucated is an award-winning documentary that follows three meat and cheese loving New Yorkers who agree to adopt a vegan diet for six weeks. Lured by true tales of weight lost and health regained, they begin to uncover the hidden sides of animal agriculture that make them wonder whether solutions offered in films like Food, Inc. go far enough. Part science class and part adventure story, this entertaining documentary showcases the rapid and at times comedic evolution of three people who share one journey and ultimately discover their own paths in creating a kinder, cleaner, greener world, one bite at a time.

​What the Health
A surprising, and at times hilarious, investigative documentary that will be an eye-opener for everyone concerned about our nation’s health and how big business influences it.